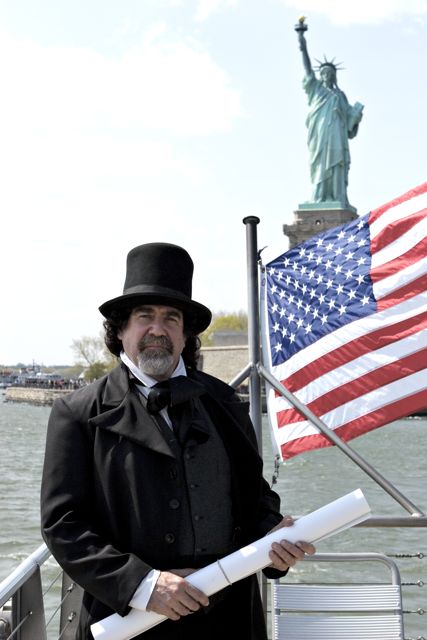 As I watched the USS Iwo Jima sail down the Hudson to end Fleet Week and the Memorial Day weekend, I thought about Military New York.  Some cities are widely known as military towns: San Diego, Washington, Norfolk; but New York has a hidden, yet proud and distinctly multifaceted military history.

While it was the site of only one major battle – The Battle of Brooklyn in 1776, as well as  a handful of lesser battles in the American Revolution – NY’s military role has been primarily of a defensive and industrial nature.  NY is a city astride major rivers, harbors, ocean and estuary; this means we have a network of forts protecting us including Fort Hamilton and Wadsworth in The Narrows, Ft. Jay and Castle Williams on Governor’s Isl, Ft. Schuyler & Totten in Long Island Sound, Ft Tilden in Breezy Point and Castle Clinton on Battery Park.

New York’s naval history is largely industrial, although we have our lesser known naval history, including David Bushnell, who built The Turtle, the world’s first attack submarine. The turtle was a hand powered submerged barrel whose attack on a British warship during the American Revolution in NY Harbor failed.  The Brooklyn Navy Yard, established in 1806 was one of America’s premier naval shipyards, launching  hundreds of ships, among them the battleships USS Maine, Iowa, Missouri and Arizona as well as the aircraft carrier Intrepid.  The ironclad Monitor, the first modern warship was built at lightning speed along its namesake street in Greenpoint and then rushed south to defend the Union fleet in Virginia. The Monitor transformed naval warfare forever.

NY’s army role was primarily supply: of men, uniforms, cannons, and a vast array of military stores from the Civil War through modern day. The Draft Riots of 1863 provided a rare example of military action in NY in the 19th Century.  NY contributed thousands of men to the ranks and fielded some of the most colorful and decorated regiments: The Irish Brigade, The Fire Zouaves, The 7th “Blueblood” and the Brooklyn 14th; the feared Red Legged Devils.

Let’s not forget good ole TR! The 1st US Volunteer Calvary, Teddy Roosevelt’s Rough Riders was as odd a collection of characters as ever seen in army uniform. TR recruited Harvard athletes, Dakota cowboys and Long Island polo players, but they were forced to leave their horses behind in Tampa in order to fight as infantry in Cuba. Their charge up San Juan Hill made TR a war hero and propelled him (along with Leon Czolgosz’s pistol) to the Presidency. A little known and sordid side of this story is that the 10th US Cavalry led that charge, but this all African American unit (The Buffalo Soldiers) was not about to be given credit for their heroism, The African American residents of the west 50’s and 60’s did what they could and named their neighborhood San Juan Hill in honor of the 10th Cavalry.

New York even managed to make military aviation history when the Wright Brothers, eager to show off and profit from their amazing invention, showed what their aeroplane could do on September 29th 1909. By zooming past Lady Liberty twice, the Wright Bros made the first ever flight over a body of water. Governor’s Isle briefly became the center of the US Army’s first Air Corps.

So, in a city best known for liberals and peaceniks, its important to remember New York’s proud and vigilant Military heritage.