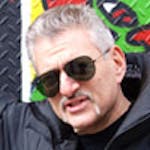 Born and raised on the Upper West Side of Manhattan, Gary comes from a house of insanely competitive know it alls. Getting some parental attention, it was not just who was loud enough, but who knew the most. Gary was / is loud and knows enough. Gary developed his passion for New York City history as well as for movie history to remain steps ahead of his brothers in the contest for parental attention and approval. Gary also cultivated a deep appreciation and knowledge of Vaudeville theatres, movie palaces, the architects who designed them, the significance of each theatre and their locations throughout the five boroughs of New York City.

After years of working as an actor (SAG, AFTRA and AEA), Gary turned his “day job” into a full time passion. As Gary said, “I did not want to smell like food, like too many other actors who waited tables, so I took a job that involved one of my greatest passions, movies.” For ten years, Gary managed Movie Place, one of New York City’s largest independent and best (New York Magazine Best of New York 1997) movie rental stores, and in 1998, he became the proud owner of the store.

Housed in a quaint, crumbling brownstone, Movie Place was one of New York City’s original independent video stores. Under Gary’s guidance, Movie Place became a longtime favorite video store and a beloved neighborhood hangout on Manhattan’s Upper West Side. During 23 years of business, Gary developed one of the most extensive film inventories of any store in the United States, including films from Europe, Asia, the Middle East, Africa and South America.

In 2006 Gary launched a one-man effort to rename 103rd Street Humphrey Bogart Place, in honor of the late actor who grew up there. In his argument before the Community Board, Gary pointed out that Mr. Bogart was not only the internationally recognized face of American film, but a product of the Upper West Side. Gary’s efforts paid off with not only a street renaming (a big deal in this city), but also a plaque on the townhouse memorializing the structure as the childhood home of Mr. Bogart. A ceremony was held on June 24, 2006, hosted by Gary and attended by various New York City commissioners, elected officials and (most importantly) Lauren Bacall and her son, Stephen Bogart. For his efforts, Gary was the subject of numerous articles in The New York Times. Despite this wonderful addition to the neighborhood and the acclaim it brought to the store, Movie Place became the victim of the real estate boom in the city. Facing a more than doubled rent in the fall of 2006, Gary was forced to close his beloved business. A valiant petition drive, spear-headed by some resourceful (and frustrated) customers, as well as several New York Times articles turned the store into the “poster child” for dying “mom and pop” businesses in New York City but to no avail. In January 2007 one of the greatest private collections of DVDs and videos ever assembled, was sold to Columbia University.

Since then, Gary has focused on parenting his two young children, but keeps his feet wet in the movie world, consulting in various forums where a film “know it all” is needed. Called a “film scholar without portfolio” by the New York Times, Gary also became a licensed New York City tour guide, which is just a formality, since he has been lecturing for years, to anyone who’ll listen, about every corner of this great city for years.

Let him take you around and get contagied with Jose’s love for this city in multiple languages, because Jose speaks English, Spanish, Portuguese and Norwegian!