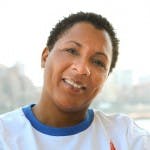 Hi folks, I’m Kristin! I am a native New Yorker, born and raised in Brooklyn. I love my town and am very excited to share its history with others. I went to school for photography and when I walk through the city, I have a great love for architecture and people watching  The streets of New York seem to change season after season, with buildings going up and coming down everyday. I lived in Milan, Italy for 13 years and I speak fluent Italian. While in Milan I worked as a stylist for Max magazine. An American friend abroad started a brunch and needed a hostess, so I managed one of the first American brunches in Italy and was the manager of the first American restaurant in Milan, Louisiana Cajun Bistro. I also began acting in Milan and did several commercial voiceovers for Italian and British radio and television.

I returned to NY in 2000 and worked in wardrobe for The Public Theatre. After 9/11, I returned to Milan in 2002 but by 2005 I moved back to NY permanently. I started performing with The Brave New World Theatre Company in Brooklyn and took a summer innkeeper job in The Adirondacks, then DC and Cape May NJ, all the while keeping up my acting chops, which I still do from time to time. Finally I started working with The Levys’ this year! Whew! Here I am, licensed tour guide and actor, lover of food and fashion at your service!