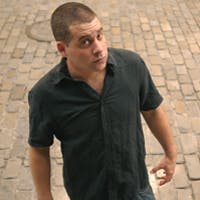 Marcus Hillman started visiting New York from the Washington DC area where he grew up before he can remember. On one of those early visits, his father tried to distract him from asking so many questions by challenging him to count the yellow cabs. It did not work. Like the taxis, the list of things that fascinated him about New York seemed endless and still does.

He moved to New York in 2005 and after various jobs in radio, education, street sales and stand-up comedy he realized he could combine his professional skills and his love for meeting people with his hobby of constantly reading about and exploring New York City by becoming a tour guide.

A life long traveler, he loves New York’s diversity and international flavor because it allows him to be among so many of the world’s cultures everyday, including the millions of visitors from across the globe. He wants to learn about where you are from even though there is a decent chance he has been there. Marcus has lived in four of the City’s five boroughs (maybe someday Staten Island?) and currently calls Brooklyn home.