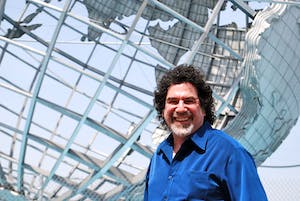 Mark Levy is a life-long New Yorker who’s lived in three of the five boroughs while working varied careers in the non-profit, public and private sectors. He grew up in The Bronx and spent many years on the Upper West Side of Manhattan, where his mother, “Gramma” Harriet Levy still lives. In 1978, he  owned and lived in a brownstone in Brooklyn’s Park Slope and in 1983, the Levy family bought and lived in  a circa-1904 Victorian house in the Ditmas Park neighborhood of Flatbush, Brooklyn. In June, 2012, Mark married the long-time love of his life, Alisa Brot and they now live in the Madison Square neighborhood of Manhattan.  He still owns the house in Flatbush, where LUNY! is based.

In the non-profit world, Mark has worked in all five boroughs as a tenant organizer, a low income housing manager and the publisher of a magazine on solar energy.  His public career with City Agencies included oversight and management of thousands of City-owned residential properties, supervision of maintenance and construction for the City’s homeless shelters, historic preservation and handicap accessibility projects for the City’s historic courthouses and damage assessment and construction management at Ground Zero after the attacks of 9/11. After taking advantage of an early retirement program in October 2002 he founded The Levys’ Unique New York! New York’s First Family of Tour Guides in February 2003. His eldest son Matt joined in 2007 and now they run the biz together.

When not running the biz, Mark loves biking in Prospect Park and throughout NYC, tending his flower garden in the front yard and growing vegetables in his back yard (and they taste great!) He enjoys traveling around the World (next is a honeymoon in Thailand, Bali and Malaysia,) adventurous eating at ethnic restaurants when home, Off Off Broadway theater and NYC’s many great art and history museums.