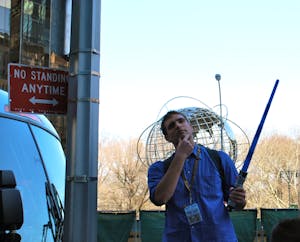 Though Matt was born and raised in Philadelphia, Pennsylvania, he feels like a lifelong New Yorker. Countless trips and visits throughout his life cultivated Matt’s love of the city, and made his move to the five boroughs in July 2008 both inevitable and seamless.

Matt did not realize he was born to be a tour guide until the night before his graduation from Ithaca College. A family member suggested it, noting his affection for both teaching and performing, and Matt had a ‘eureka!’ moment. Soon after, Matt moved to Brooklyn with guns a blazin’!

On Matt’s tours, group interaction is key—when people ask questions, make comments, or fire back at his hilarious (read: corny) jokes, he knows everyone’s having fun! Matt loves the history of New York and the stories of its inhabitants, but he is especially driven by current happenings (concerts, sporting events, nightlife). In addition he is fascinated by transportation in NYC, including our amazing (seriously!) subway system. Basically, Matt is deeply passionate about the day-to-day stuff that makes New York, New York! (Matt also likes candlelit dinners and long walks on Brighton Beach.)