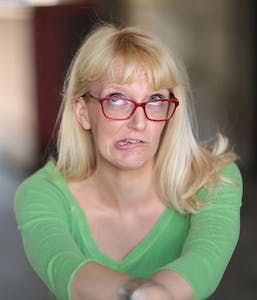 Sarah moved to New York City on a whim, “just for a couple of months, to check it out,” roughly 15 years ago, and never quite got around to leaving. Not that she ever would. She bopped around Brooklyn for the first half of her tenure before settling uptown in Inwood, mere blocks from the only standing natural forest in Manhattan (Inwood Hill Park), which she firmly believes should be a required tourist destination.

With a background in theatre, a Masters in education, and (perhaps most importantly) more than a decade of bartending experience, Sarah likes her tours to feel like a conversation, not a monologue. It’s all about the two (or three, or thirty!) of you exploring the city together. The best questions are the ones she can’t answer–just another excuse to hit the books. (In addition to being both silly and self-deprecating, Sarah is also an uber-nerd.)

She’ll tell you the best places to grab a slice (or a cocktail, if you’re old enough), show you the spot where she almost ran over John Malkovich on her bicycle, point out the restaurant where she once chased a member of the Wu Tang Clan down 6th Avenue when he walked out on his bill (but you have to come on a tour to find out which one), or maybe just geek out about the city’s mindboggling infrastructure while climbing on statues in Central Park. Whatever you’re into. It’s your tour!

Oh, but fair warning: If there are street musicians about, there WILL be dancing. Life is too short to worry about embarrassing yourself in front of strangers.