In Brooklyn, We Go Hard: A Biggie Smalls Tour

It’s no surprise that Brooklyn is home to stars near and far. From the original tough-tawkin, wise-crackin, no-nonsense blue collah Brooklynite Jackie Gleason who broadcast the very idea of Brooklyn straight into peoples’ tv sets, to Jay-Z – a  modern rags to riches hip-hop superstar straight from the Marcy Houses, Brooklyn has always made magic out of its inhabitants. But the one Brooklynite-based tour request that we get is the Christopher Wallace, aka Biggie Smalls tour.

Now you may think to yourself, “What does a bunch of middle-class machers with the surname Levy know about growing up in the hood!?” Well, just because we weren’t around during the American Revolution doesn’t mean we can’t spin yarns about G. Washington’s Battle of Brooklyn. And so it stands that our tour guides are passionate and professional about the history of our borough and the stories of its inhabitants. And Biggie Smalls was much more than his name and his raps. He was proof that with street smarts and head smarts you can make it big, no matter where you’re from.

The tour starts at George Westinghouse HS, which is where Christopher Wallace went to school. Fellow hip-hop classmates include Busta Rhymes and Jay-Z. at the same time. This is where our guide introduces rap and hip-hop, the origins of which start in The Bronx and talk about how it spread to the other boroughs and eventually around the world. Regarding Biggie’s early life and West Indian origin. His mother Voletta is a Jehovah’s Witness so Biggie went to religious schools in his early life and didn’t transfer to public school until high school. Busta says he didn’t even know that Biggie rapped in High School, just knew about his hustling! 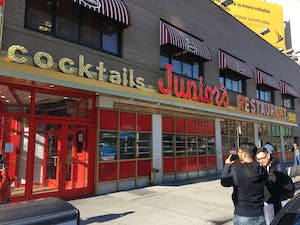 Across the street from George Westinghouse is Albee Square, where not only Biggie rapped about Albee but lots of rappers name-check it in their songs, including Lil Kim another Bk hip-hop star. Then it’s over to Juniors, with their world-famous cheesecake, which is undoubtedly one of the hotspots where Biggie earned his nickname. That’s a signed photo him with Jay-Z on the wall. 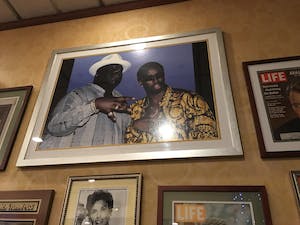 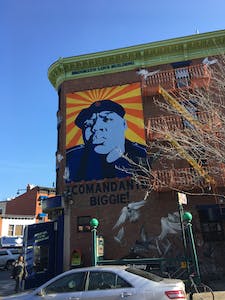 Christopher went to Brooklyn’s Queen of All Saints School for middle school. He excelled in English, which obviously shone through with his future rap career. Nearby is also the Country House Diner, which was a local favorite of Biggie’s. If you stop in for breakfast, order his “Big Poppa” recommendation: “A T-bone steak, cheese eggs, and Welch’s grape.” (Is it juice or Jelly?!) The Golden Krust Jamaican patty bakery used to be known as the Patty Place Bakery. Being of Jamaican heritage, Biggie liked his beef patties spicy.

Along on Fulton is Biggie’s official “hustle spot,” in front of the DLC Comprehensive Medical Center, formerly the Mayfair Grocery. If you don’t know what a “hustle spot” is, then you probably don’t need to book this tour! It was where Biggie made his deals and booked some bucks.

A few doors down, the Fine Care Pharmacy was a liquor store back in B.I.G.’s heyday and was turned back into one for the Notorious B.I.G. film. He shot dice and smoked wacky tobaccky with the neighborhood kids at this corner. 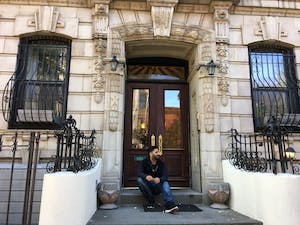 Veer off Fulton half a block to see Biggie’s building. He lived on the third floor but spent a lot of time on the roof, where he kept a trunk of polo shirts, more than a dozen size-14EEE kicks (Biggie would change into his “regular kid” clothes before entering the apartment to make sure his Mom didn’t suspect.) Biggie lived here with Voletta until he married Faith Evans in 1994. 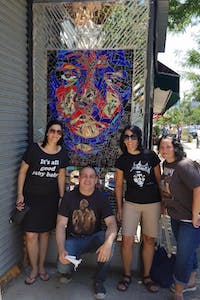 The Orient Temple-Across the street from Biggie’s childhood home is where Biggie and his homies performed freestyle at underground parties. The space has been closed for two years, but is being converted into a special-events venue. Back on Fulton at the Met Food (Now Key Food) Supermarket is where the Notorious B.I.G. once worked as a Notorious Bag Boy. Check the little mosaic of him there.

Stop next at the Respect for Life Barber Shop to meet Chandler “Guess” Smith. He was the original hair man for Biggie from 1987 until his death and continues to clip members of the Junior M.A.F.I.A. Farther along Fulton street is the Crispus Attucks Playground aka the Christopher “Biggie” Wallace Basketball court. 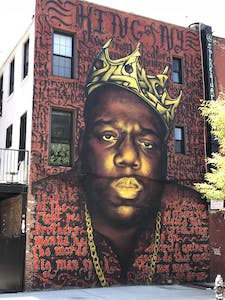 Lastly, deep in Bed-Stuy is the “King of NY” Mural by artists Scoot Zimmerman and Maoufal Alaoui. They’ve kept Biggie’s spirit alive and bigger than ever with their mural honoring the rapper.

So now that you have a step-by-step tour outline, why even hire one of our incredible tour guides? Because our passion and profession for the life and rhymes of Biggie Smalls will make this tour outline come alive. We can’t wait to show you Biggie Small’s Brooklyn!