Personal History Tour of the Jewish Lower East Side

Every so often we get cool tour requests that take one of our standard private tours – say, the Jewish History of the Lower East Side. . . and add something unexpected. Such was the experience when one of our supercool private tour clients, Susan, who called herself “the only goyem in a group of 4!” looking to learn about the LES with a lasered focus on a couple of specific addresses.

Always up for a challenge, I booked the tour for these 3 Members of the Tribe plus Susan and, in the email correspondence, asked Susan to explain why, for example, she wanted to stroll past 90 Stanton street, 176 Orchard street, and 314 Broome street. She explained that two of her gentlemen friends had grandparents and GREAT-grandparents who grew up and worked at those buildings!

Jackpot! So I put one of my best tour guides on the gig, Gary Dennis – a font of knowledge and a whirlwind of corny jokes, deep understanding of the paths of immigration and a snazzy dresser to boot (provided you like all black.) Gary was given the following details about the client’s ancestors:

What’s more, Gary learned that the stops in front of each building were to be treated as a SURPRISE. How exciting. So the tour went off as planned, with Gary stalling in front of each address in order for the reveal. The best part was at the end of the tour, in front of 176 Orchard street, when Susan presented two of her friends with some actual seltzer bottles from Nathan Goldstein’s seltzer factory that used to operate next door to the Orchard street address! She found them on Ebay and wanted to present them on site! Even Gary was surprised. All in all it was a perfect tour of NYC. 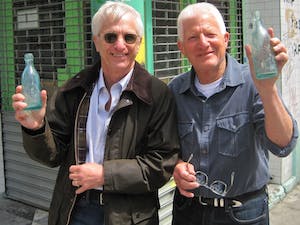